When I first heard about the Fly Me to the Moon planned exhibit I was definitely interested and was assigned Dick Gordon. At that time I knew very little about him and so I spent many hours on his website, reading about his missions, and looking through hundreds of NASA photos–all under public domain. All of the astronauts have their photos taken wearing their spacesuits with helmets in hand in a formal pose. I knew that was a dress-up day—and that they worked hard perfecting their skills.

We have been to NASA several times–we live just an hour or so away and it makes for a fun family day with the rockets and all the exhibits. Then, too, I happened upon a set of paintings by one of the astronauts of what it was like to be in outer space—and I was quite envious.

I picked an informal photo of Dick Gordon suiting up.

I decided to represent the earth as I have seen it from a plane–all rectangles and squares and different colors of brown and blue and tan. I separated this with some finely pieced rows of what I thought it might look like to be blasting through space with some jagged white lines through blue—then a wide strip of blue and another set of earth formations as they returned to earth. Some of this fabric was hand-dyes, some commercial fabrics.

Next came the image. Since this was a public domain photo, I enlarged it, then traced off major components. I chose the fabrics very carefully–a brown with stars for his hair, a pledge of allegiance printed fabric for his suit, a dark blue flowered print for the inside collar and cuffs—from my grandmother born in the 1890’s who lived through the Wright brothers first flight, WWI , the depression, WWII, John Glenn’s orbiting the earth, and the landing on the moon. I also included a small bit of fabric from my father’s shirt as the NASA patch–he was a proud WWII veteran who served in Pearl Harbor and flew the flag at every opportunity, bought and wore a poppy every November 11, and marked all the veterans’ graves in local cemeteries on Memorial Day and Fourth of July.

I cut out the large pieces and then hand-applique them into place. I mark the major lines from behind and begin to stitch. This piece took about 30 hours to stitch the face, suit, and hand.

Some quilting is added to the background so it will lie flat. The final step was adding the lettering. I don’t use an embroidery machine–I write them in a wordprocessing program and enlarge them to the appropriate size, then put the paper upside down on the back and trace it over with my sewing machine—then turn to the front and heavily stitch the letters.

Last step is adding a backing, binding and sleeve and a label.

All told this was about six weeks of solid work with four to five hours per day. 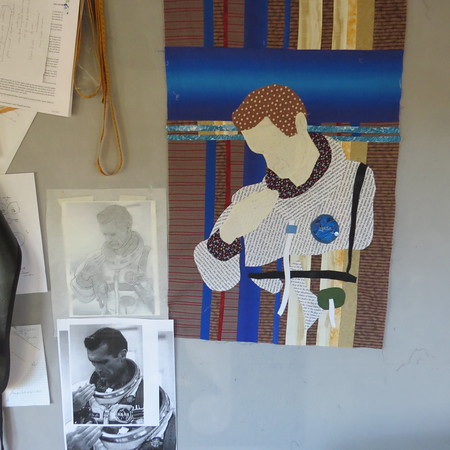 In 1969 our parents let all of us stay up late to watch the landing on the moon. Although reporting seemed to be much more factual than opinion at that time–there were details omitted from that occasion. One thing was that Buzz Aldrin, an elder at Webster Presbyterian Church off Nasa Road 1 took communion before opening the hatch and stepping out. Every Sunday closest to July 20, that church celebrates Lunar Landing as one of its High Holy Days.

An exhibit of the Apollo missions was on display in the sanctuary–a beautiful space filled with gorgeous abstract stained glass windows by Steven Wilson. The sermon was an eulogy for John Glenn and Annie, both members of that church also–Annie played the organ, John was also an elder and preached several times.

I was fortunate enough to have my piece about Dick Gordon hung. And here I am standing near it— 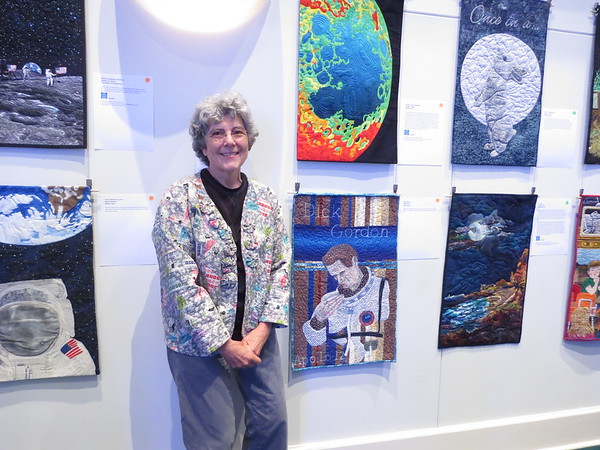 It was a spectacular show beautifully displayed. To my surprise I was welcomed by the associate pastor and greeted by the art director. There will be another meeting on Friday night; I’d love to go but it would mean driving back in the dark–I’m not so good at that any more. We’ll see how brave I am.

Tomorrow I’ll describe some of my process in making the piece.