Posts from the ‘bees’ Category

My earliest memories of honey was the block of honeycomb dripping with honey that sat at my grandfather’s place at the kitchen table. We were never allowed to have any while he was there but when he was on his accounting trips for the State of Wisconsin, Grandma let us have whatever we wanted–including sampling that honey.

Since that time I thought it would be fun/cool/interesting/challenging to raise bees–or more realistically manage a hive or two. 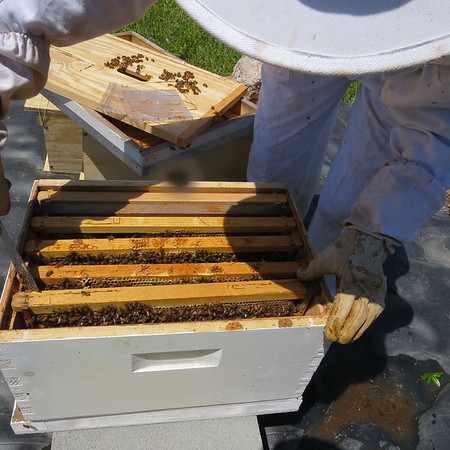 One year for my birthday I got a complete bee suit with gloves; I ordered a bee hive and then we waited for the bees to arrive. Nothing happened until I noticed bees flying in and out of the corner of my shop out in the country. I attended local bee keeping meetings and i was advised to wait until spring to remove them.

Wow–what a challenge that turned out to be! We lit the smoker, suited up–horribly hot in the upstairs of a tin roof building; cut open the wall and faced thousands of bees–none of whom were happy to see us. We plunked as much of that comb and bees into a waiting box.

That did not work very well–but we did seal up the outside of the building.

Then a good friend told us he had done a recovery and would we want those bees. Of course we said YES!!!

And so I had one hive. We carefully transferred it to a larger box and then added and added and I had a honey harvest the first year.

Second Year–the year of intermittent floods and heat in which we tried to do a split several times, successful once–and the hive moved to the chicken yard—where it was slimed out in just one month. The other hive succumbed to wax moths–and I was left with just the one hive.

I had also signed up for a beginning beekeeping class and had a school hive to manage and bring home to my apiary–duly registered with the State of Texas. Those bees tend to be a bit testy and we are seriously considering requeening to a nicer lady. Sometimes they seem to have gotten up on the wrong side of the bed–while the first hive is always calm but interested.

We have two big hives and starting to add to our flock-herd-group-not sure what several hives are called–maybe a Buzz?

And for those of you who notice such things–yes, I did have a piece of dirt on my camera lens which has now been cleaned.

With an abundance of beeswax I decided I wanted to try batik. I read through several books on batik—and then used a cute little crockpot to heat up the wax and apply it to cotton fabric. My favorite tool was an old potato masher I found at an antique store for 50 cents.

Then I wanted to try crackle–a traditional aspect of batik involving fine lines in a random pattern–usually in black. So I soaked the fabric in the wax, twisted it up and then put it in the freezer. Beeswax does not crackle as well as paraffin or soy but I thought I give it a try.

Next is removing that wax. I tried ironing it with an abundance of newsprint paper—but the resulting fabric was still quite stiff–smelled like honey–but too stiff to be called fabric.

Off to the restaurant supply store to buy a large soup kettle–and a sieve to fit inside—that sieve didn’t work but suspending the fabric with a bit of chicken wire over the top did.

Here is the result of my first batik efforts. The piece on the most left has been dyed twice.

Extracting honey is a sticky business at best and certainly time-consuming when done all by hand–not with a centrifugal extractor—I am promised one when I have several more hives than just my one very active large hive.

I now have an official honey strainer and thanks to my dear friend’s husband and son a honey buck with a gate valve to strain into. Previously I used a cone strainer from my mother’s kitchen that strained elderberries for jelly—and a large Tupperware bowl.

he method is still the same, scrape off the cappings into a large pan, dump it into the strainer and repeat on the other side of the frame and then the next frame and the next.

I found these inclusions on a honey super–scraped a bit out and inspected under microscope to see pollen grains—this is bee bread–a protein source for the bees during the winter months.

I now have about a gallon and a half of honey to put up into jars adding to my supply—and probably at least one more honey extraction if not two before winter.

Beekeeping can be challenging and a lot of work at times. The flow (of nectar) has been particularly heavy this spring–surprisingly so and I have had to harvest honey three times this month from just one hive and really need to do it again when the weather clears up. Bees are not particularly fond of having the roof over their head removed while it is raining–and I’m not really fond of working in the rain–walking yes, looking at it from my window and enjoying the sound of the rain on the roof particularly a tin roof, yes==but not working a hive.

Here is my honey harvest from the first go round. I had so much comb honey I used all my freezer containers and had to buy more

from the restaurant supply store.

I do like the carafes for storing honey for use in my kitchen. They are easy to pour from and easy to see how much remains. Unfortunately I do not have tight fitting caps for all of them, I think Toby chewed up one or two and thusly the aluminum foil cap. 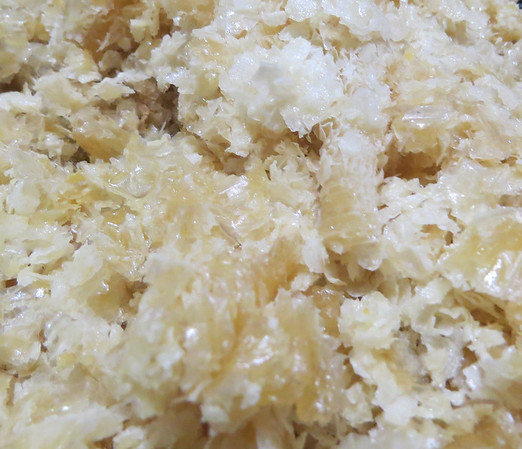 Last week’s assignment was ‘what is it?’. This is always a fun assignment as photos are posted and people guess as to the origin of the photo. Many of the photos are macros or cropped. The guessing is fun and frequently people are stumped. This exercise encourages looking at things from a different point of view.

My entry this year is from a morning’s work in my kitchen.

This is the wax residue from processing five frames of honey from one of my hives. It is a very sticky project and I end up washing my hands and wiping down kitchen counters multiple times during the project, followed by mopping of the floor at least twice. I now have a lot of honey in jars and some comb honey in containers.

This is not a cheap hobby but there are definitely more expensive ones.

The sun is shining but it is still a relatively cool 79 degrees this morning. Humidity is drastically lower than the 94% it was on Saturday and the world seems right again.

Today I put another box on my chicken yard bee hive–the bees much better behaved today than the previous day but the deep box is clearly full and the bees needed more room. I found two hive beetles and scraped away at the inner cover which had been stuck to the telescoping lid. A few bees were hanging around outside the hive after I finished—so felt a success. I did not inspect the hive–figuring disturbing them twice in less than a week was not a good idea.

Then out to the front yard to check out the lilies. I bought a small pot several years ago at our local Master Gardener’s sale–and we have split it at least once–but now it needs to be split again. The blooms are huge and many.

The fig tree is doing its best but I have yet to find ripe figs on it. I would guess the blue jay or the pigeons get to them before I do. This fig is hard; definitely not ripe.

And here is a glimpse of my neighborhood 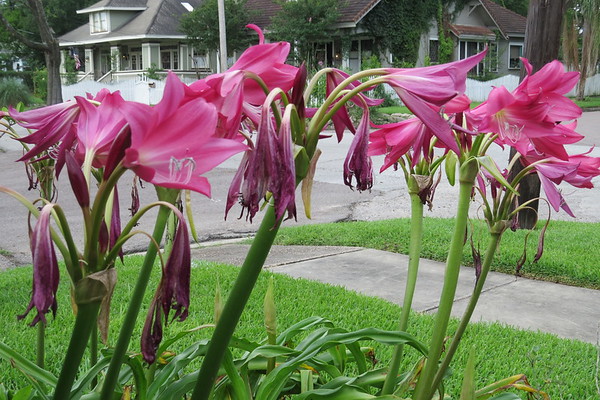