It has been awhile since I last posted here—and it hasn’t been for lack of time. Maybe it is because time hangs heavy these days and the idea I should be doing ‘something important’ is so overwhelming I spend countless hours trolling the internet hoping for inspiration. Instead I find anger which is just fear dressed in another color—anger at being asked to wear a mask to protect others, and anger by those who think mask wearing is an infringement on their ‘rights’. And then there are those who post funny/ wry commentary and some who post just ‘regular’ stuff like picnics with families, garden produce and so forth.

I have no excuse for not doing ‘stuff’; I am filled with an immense feeling of abandonment— my family is far away and busy with other family members. While husband is attentive and caring and the dogs are definitely loving—and mischievous at times, I have little motivation to DO something, anything. Each day is the same as the day before with the only challenge is ‘what to make for supper’ and ‘who is cooking’.

About ten years ago I nearly died from systemic disseminated histoplasmosis—a fungal infection that had a mortality rate of about 95% at the time—and I’m sure it would have been a higher rate if a massive does of steroids initially had been included. Each day while I was in the step-down unit was much the same as the previous with the only point of interest, the evening meal—such as it was. I am made of tough stuff—my sparring partners in karate…mostly young men…would stand back and say–you look soft but underneath you are as tough as nails…and I think that is probably true.

I recovered from that illness although I am left with reminders, reminders I need to be very careful regarding corona virus. I had to alter my work, my hobbies, and my life for the new way of life I now have.

I put one foot in front of another; tried hard although it is so tempting to not look back with regret of past abilities but to concentrate on moving forward.

I like to include photos with my posts–not everyone likes to read essays. During this time, I managed to finish the project my mother left for me—quilting all the tops for her grand-children. They have all now been delivered. In addition, I have been cleaning out her quilting supplies and put together this little lap quilt from triangles my dad cut out for her and the pieced flowers. I sent this to my sister=in=law who is undergoing chemotherapy for ovarian cancer–the cancer my mother dealt with for 13 years—its’ mortality rate was 95% in 2 years===so I am indeed made of tough stuff. 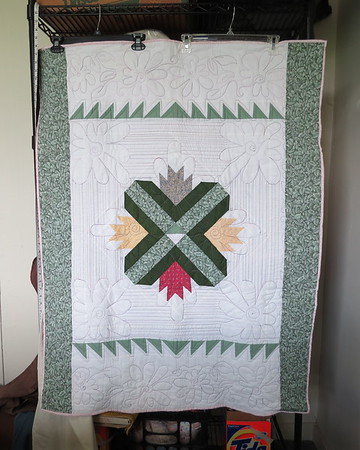 Like Loading...
From: Goals and Dreams, Home and Children, LongArm Quilting, Uncategorized
← Keeping busy and sort of out of trouble
Forward →
No comments yet