Some years ago, a well-known quilter announced she had no UFO’s. I was impressed and thought it a worthy goal. She started a piece, worked on it to completion, photographed it and went on to the next. However, she had a lot of random blocks she had sewn in the past, testing patterns or colors or even a workshop or two. She arranged all of those blocks into a completed quilt, calling it Dangling Participles—it was gloriously random in color and pattern mixing a wide variety of fabrics and techniques.

After my mother died and I inherited all of her fabric stash (along with every pair of shoes she had ever owned—those went into the trash as they were both worn and the wrong size), a huge stack of quilt tops to be made into quilts for her twenty or so grand-children  the backs of my Dad’s bib overall legs to be used in patching the fronts (hay being pretty tough even on denim) and a lot of random blocks and leftovers.

During this pandemic I’ve finished up all of those grand-children’s quilts, made quilts for all of the great-grandchildren of brother’s grands, made several from her fabric for a couple of charities and whittled the volume down quite considerably. It has been hard for me to be creative–I require serenity and these are not peaceful times.

But there was a large box full of Mom’s blocks and random bits, some hand pieced, some by machine, some oddly shaped and some elaborately embroidered.

After Mom’s chemotherapy for ovarian cancer, she had a lot of trouble with neuropathy in her fingers. It was hard for her to do certain tasks and so my Dad took over, welcoming a break from picking out black walnuts. He was quite productive and drew out and cut out dozens if not hundreds of triangles and diamonds.

I put all of those triangles together as leader/enders in other projects, pinning them together in the evenings while watching Netflix’s—I opt for the heartwarming variety of shows—like Criminal Minds—the good guys always win and the bad guys always caught in the nick of time to save the last victim.

Over the next few days, I will post images of the piece as I work on it. I have taken this on as a creative challenge and maybe when this is completed, I can begin a new art piece.

What sort of blocks and pieces do I have? I put them all up on the design board but it is hard to get all of it in the image. 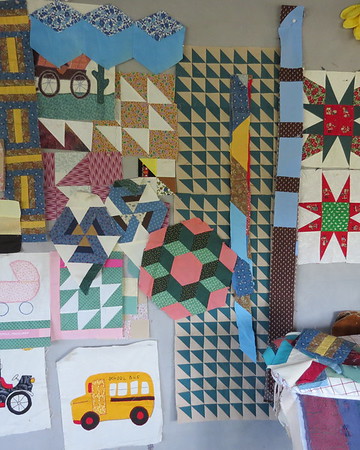 Like Loading...
From: Artwork, Home and Children, Uncategorized
← A sticky business
Dangling Participles II →
No comments yet