Several years ago, there was a booth at the Quilt festival in Houston featuring Rare Bears. This is a project now encompassing over 11 countries and sponsored (among many others) by Spoonflower. Spoonflower prints pairs of soles for teddy bears; huggable Teddy Bears to be given to children with rare diseases.

Of course I signed up with great intentions but this past month finally put together two of these bears. I made them from bamboo fleece that was hand-dyed for another project—and the bears required fairly small pieces. I think I have enough for one more bear.

While they prefer the Rare Bear Army members to send just skins.=—take up a lot less room–I had to see how these bears would look.

Here is my sweet husband trying out the huggability of the bear.

Here they are hopping into the box to send away.

And here they are with little notes. 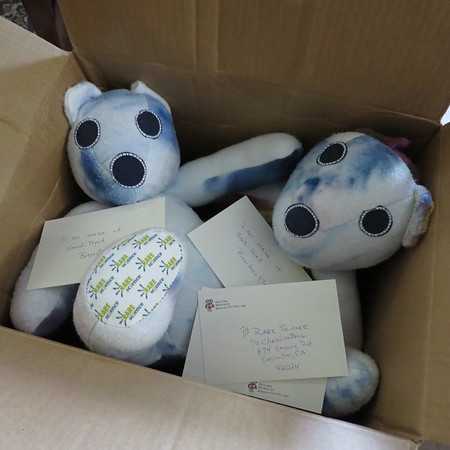 When they are gifted to a special child, a photo is sent of the bear with their new master. I hope these two get picked soon.

And for a bit of trivia: – Rare Bear’s factory Pratt & Whitney R-2800-30W engine producing 2,250 shp was replaced by a Wright R-3350 engine producing somewhere between 3,400 – 3,800 shp depending on the base model selected – factory numbers. As a current racer, the specifics of Rare Bears engine remain undisclosed.

In 1976, the engine failed during the Mojave Race with a resulting belly landing. It wasn’t raced again until the 90’s.

More details are abundant on the internet, but I might just ask at the Lone Star Flight Museum sometime.