Some years ago, I won a covered Marble notebook at an event; I immediately began to use it as a journal. Since then I have covered many Marble notebooks and currently have a stack about three feet high of completed journals. I have also covered 3 ring binders, and my sketchbooks. I use pieces that are an experiment–something I wanted to try on a small scale but decided against a large piece, leftover bits from other projects–that are too many and too big to make into postcards (another fun project).

And then sometimes I make them, just because I want to play around with fabric and thread and paint and have fun without any grand expectations of a formal art work.

Having been gifted the contents of my mother-in-law’s linen closet–some lovely vintage doilies among other things, I decided to make two book covers for her two daughters–my sister-in-laws. One of them is an artist and so I covered a sketchbook, the other is more bookish and so she got a Marble notebook for her to keep records of whatever she liked. The covers are removable—and I could do that with mine—but I enjoy have new ones to look at.

The doilies were linen with fine tatting around the edges–made by their grandmother who had an advanced degree in Home Economics or perhaps it was Domestic Science at the time.  I hand-sewed them onto some wild sand-dyed fabric I had made…so vintage over modern Bohemian. 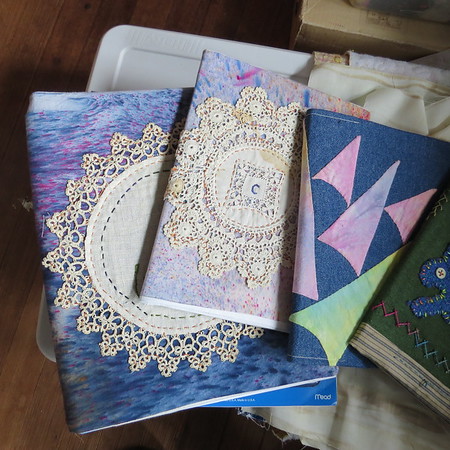 The one on the far left is the sketchbook cover, the next one to the right is the Marble notebook. The two on the far right are two workshops I took, and definitely did not want to make either project the fulls size—-of course, that one with the purple and greet triangles might have been more successful if I had not used a stretch denim as a base.

And yes, they both said they loved their notebook covers.