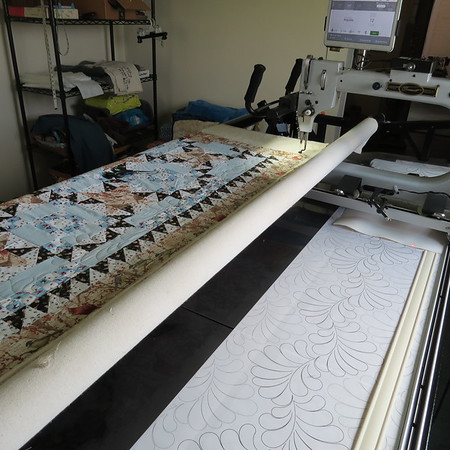 Two or three times a year, I like to buy a new pantograph or two. I’ve bought them from the Gammill dealer in Texas and from Urban Elements, an on-line store. I was surprised to learn I really like doing these edge to edge designs; after the first two or three rows, they become very meditative.

This panto is called Feathered Kisses; somehow the ability to do decent feathers has escaped me despite several attempts. This particular one undulates across the quilt, leaving little sections unfilled. Instead of doing random loops and twists to fill in the space, I employed the use of a Venetian blind header (they were really cheap and the header which covers up the mechanism for drawing the blinds up/down broke and fell off. I had been using it as a straight edge to cut sections off the batting roll.

However, I was able to place it so I could follow the lines of the design and fill in all those little sections with pattern.

Unfortunately, I discovered I mistakenly used the top of the undulation as the TOP of the pattern when actually it is low point of the undulation that is the top—–really technical hear….but I ended up with a gap of about 3 inches to fill in somehow and make it look like I intended to do this.

That quilt has just three more rows to do—and then there will be another to add to the needing binding stack.

Like Loading...
Tags: urban elements
From: LongArm Quilting, Uncategorized
← Rock Walls, building Stones, and Wall Finish
Notes and Such →
No comments yet