Every morning–except Sunday I sit and do the daily crossword puzzle and the Seven Little Word Scramble. My day just doesn’t seem complete or ready to begin until I do. Unless the clues in the Seven Little Words include names of celebrities I don’t know, I can run through it fairly quickly.

But then on Saturday, there was a stumper—-a funnel shaped strainer used in cooking.

And then double or triple disaster—there were two celebrity names as clues–one was Tevye’s oldest daughter’s name–I could look that one up but then there was the last name of someone I didn’t know.

I had to wait until yesterday morning to find out.

Chinois—taken from the French word for China–and represents the cone shaped hats they wear in the fields.

So while I was waiting anxiously to find out the proper name for that funnel shaped thing we called a strainer, I worked on some donation blocks and three donation quilts for a quilt guild and a local charity. 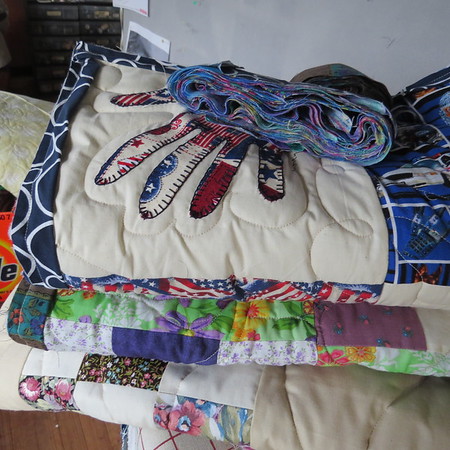 The workmanship on these quilt tops was not perfect; not even mediocre in some–but they are now ready to be handed out.

I did the best I could with these tops–perhaps I should have dismantled them, tossed out the poor quality fabric, replaced with nice fabric–but then the gift of the original giver would be diminished.

And after I finished those tops, I bound a piece inspired by a painting by Gustave Caillebrote named ‘The Orange Trees’.

Like Loading...
From: Artwork, Home and Children, Uncategorized
← On pins and needles
‘Spearments and Such →
No comments yet