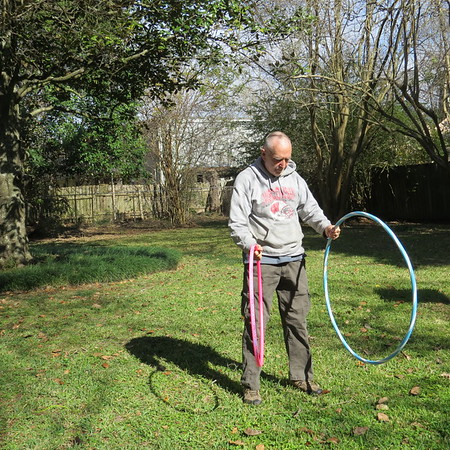 Although Christmas Eve began with mist and fog and generalized dreariness, by noon the sun was shining , the yard was no longer muddy, and we were all eager to get out of the house. It was a perfect time to capture something involving ’round’.

Two hula hoops used to live in the trunk area of the ForeRunner until backing up one day into a crepe myrtle tree–surprisingly sturdy—necessitating the removal of all the dog toys, bowls, water jugs and so forth to replace the broken window–may I add my assistance in holding the window while nuts and bolts were tightened was quite essential to successful completion of the task. It rather reminded me of medical school days in which I was assigned to hold a Retractor so the surgeon could see and provide an educational experience for me—I could see nothing–but I did get some strong arms.

On to the project.

I set up my tripod–still not used to it but I won’t be if I don’t use it. 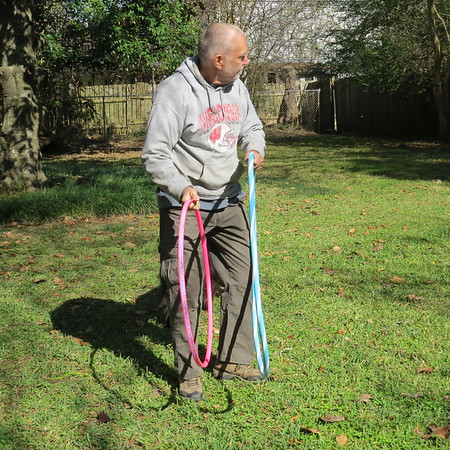 Dogs ran out eagerly–everything is their favorite thing to do. But they discovered a very naughty squirrel leaping from tree to tree–not where it was supposed to be–maybe the neighbor’s tree out of their sight? This job needed a lot of barking and jumping up to try to catch that squirrel–never mind us standing over there with husband holding hula hoops and me behind my camera. 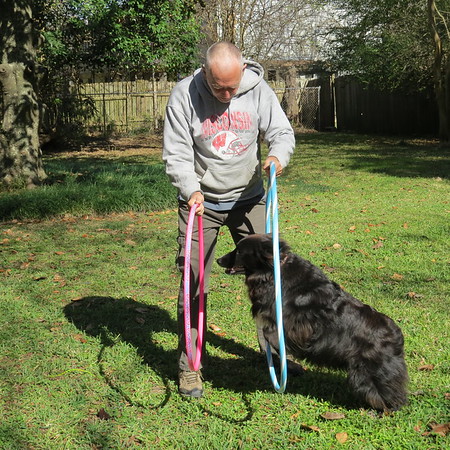 Eventually they did come to see what we were up to—Dora being the first to give it a try. It was a hard concept–why jump through two hoops when you can jump one and walk through the second? She managed a few jumps but then Toby had discovered the large purple ball was not doing anything–and needed chasing about.

The hula hoops were set aside, no doubt wondering if those barking creatures were going to return.

Somehow that ball got stuck somewhere and Toby was ready to jump. She also could not figure out why anyone would jump through two hoops but then she watched Dora and knew she could out-perform–so sailing through both hoops as fast as she could both forwards and backwards–Foolishly I had not set my camera on sports mode but I managed to get a few good shots.

Having shown off her superior athletic skill, she promptly sat down by one hoop, Dora came over to sit on the other side—and the message was clear—Where is our reward for doing this jumping thing?

If you wish to see more shots of this adventure–this is about as exciting as we get these days–they are on my smugmug site here: https://sylviaweirphotos.smugmug.com/HouseinBeaumont/Toby/i-Ks3B9ZV/A

Like Loading...
From: Home and Children, Pawprints, photography, Uncategorized
← Lemon Marmalade
Gadzooksery and Boxing Week →
No comments yet