This was the first fiber piece I did in an Illustration class–and the only fiber piece in the student offerings. The instructor did not know what to make of it and would look at it and then walk by to discuss another work of art. After class he met with me and confessed he did not know what to say—I asked him to evaluate it for design and composition–but I did not expect him to help me with construction details. He seemed relieved at that–and coveted a piece I made later for the annual art sale–as it did not sell I gave it to him–he and his wife argued over where that piece should hang–his office where he could see it every day or their home where she could see it. High compliment indeed.

Photo is of my husband on the banks of the Mississippi in Cassville where we were looking for eagles—all roosting in the tops of the trees. It was winter time and everything was white, black or gray–a good start on a black and white assignment. 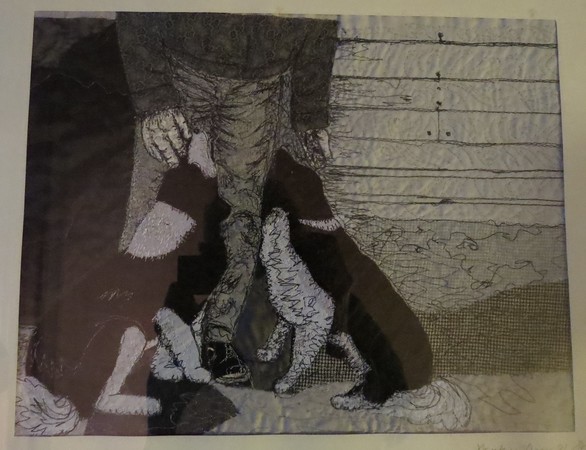 I took this photo when I was fourteen. It was my father and his two Border Collies, Trixie on the left and Sam on the right. I took that photo with a Brownie camera. Dad always greeted the morning with petting his two dogs–his hired hands ==as he headed to the barn for morning milking. It is matted and framed.