About two years ago a dear friend suggested I occupy myself during back surgery recovery with working on a mystery quilt with clues posted on Fridays following Thanksgiving with the big reveal on New Year’s.

That was the first one, then another one the next year and now like others, awaiting this year’s first clue.

Along the way, though, I was introduced to the concept of Leader-Enders–not a new concept but one that I had not really implemented. Essentially, while sewing on one thing, another thing is being constructed bit by bit instead of sewing onto a small scrap of fabric.  For those unfamiliar with sewing machines, there is a terrible thing that happens when a first stitch is made with a wide opening for the needle.—One of two things—a bird’s nest which is not easy to disentangle—or the fabric gets sucked down into the hole leaving a wadded up crumpled up start—not nice when you are trying to make nice linen napkins.

The writer of the mystery quilt top also has a challenge each year—and last year’s was to make lozenges.

So I cut a lot of those three by six inch rectangles–and having a nice stack of fabric samples from my mother’s stash—from the days when you got a stack of actual fabric to select what you wanted—those got cut into quarters and used on each corner.

When I finished I decided to try a pantograph pattern—and learned lots about how to work those—not something I think I’ll be particularly good at—but I have a lesson coming up in December–so holding off judgement for now.

Here is the completed top. It has binding on it and is on the foot of my bed ready for chilly nights. 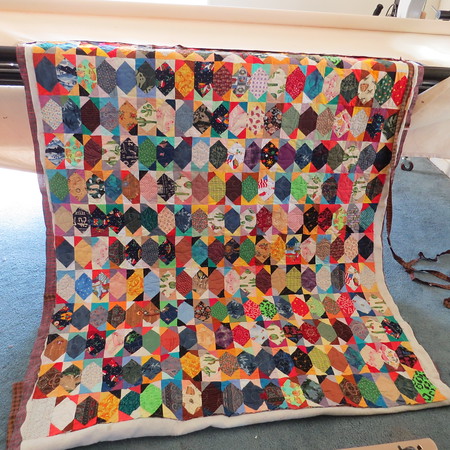