Trick or Treat at the Houston Quilt Festival and Patching clothes

Today I drove over to Houston for a class in Boro indigo patchwork class. The drive wasn’t bad considering the amount of rain we’ve had in the past few days—thanks to Hurricane Patricia. Roads were under water yesterday and many of the Trans Star cameras were knocked out by the high winds and rain.

Then I arrived at the Convention Center. Modeled after the French museum and meant to resemble a steam ship, the George R Brown has expanded several times and is now once again under construction adding a new hotel in what used to be my favorite parking spot..

I hurried past the construction crews, got my packet and headed for the classroom. With the George R Brown also under construction with a new sky bridge contemplated, much of the hallway was blocked off—and the food places were scrunched into just one little section of the hallway.

I met several other people and we all thought the same thing—maybe we should have canceled our plans—it is hard to imagine just how packed it will be on Thursday with the show open.

The class was fun–but I forgot my sewing materials–and had to beg, borrow–and finally buy another little pair of embroidery scissors. The class room was full of busy people–with three dye vats and multiple dippings, there was a lot of congestion.

Boro is patchwork–a way of using fabric to patch clothing until it literally falls apart. here are my samples. 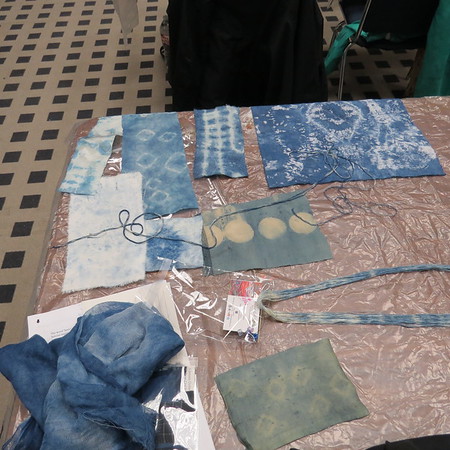 Here are my photos of the day—-