A new Camera but I’ve been busy 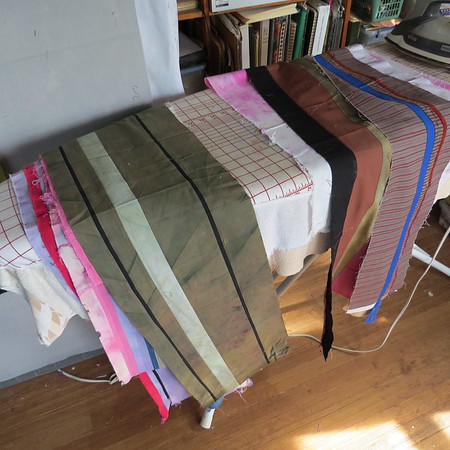 sorted strips for another project

these small pieces were castoffs in a workshop and are my leader-ender project. There are long skinny triangles and short fat wedges–none are very large and I am contemplating a finishing with perhaps an inset of a plain muslin 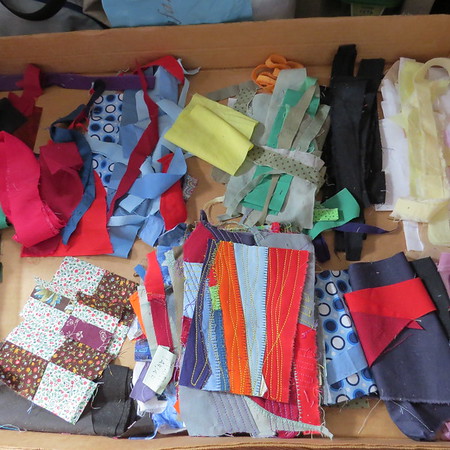 these are destined to become postcards–the small squares on the left side are not included. but in the center of the bottom row are the stack of partially finished cards with a lot of stitching on them. I still have to sew on their backs and then do the edges.

Several weeks ago I had the misfortune to drop my beloved Canon directly onto its lens. This was a replacement for the one that went swimming unintentionally in the Rio Grande–and used double A batteries which I could find anywhere I traveled. The new model requires a lithium battery with its own charger. And so now I am back in business of taking photos. It felt like I had lost a hand or a foot without that camera. I did have a cell phone but downloading the photographs was beyond my skillset

However, I’ve been busy in the meantime.

Sorting things is one thing I do and you can see my sorted out scraps from a recent Nancy Crow workshop. I did finish the piece I started there–it is in the line=up to be quilted. I make these small scraps into postcards that eventually I send on their way to my fellow classmates–and may feature in the book I am writing about postcards.

And then of, course, there is the leader-ender challenge. SEwing off into bits of fabric so that the needle is never without thread and there aren’t all those long thread tales to deal with.

Now I’ll stop writing and put in the photos and get back to priming the staircase in my house.

this is from strips I constructed several years ago that have been patiently waiting in a zip-lock bag. It is the base for a new art piece

****I’ m not quite sure how this happened–but this post is labeled as a draft but yet I’ve had a comment on it–so I am reposting it–my apologies to anyone who has now received this twice.